2018 is the centenary year of the birth of Leonard Bernstein. Among the many events to mark the year is the Bernstein in Chichester festival, which celebrates Bernstein’s Chichester Psalms, commissioned for Chichester Cathedral by its dean, Walter Hussey.
I shall be speaking about Hussey at a symposium event on April 20th (booking details here), and then curating an exhibition of archival holdings about the Psalms later in the year, including some of Bernstein’s letters. It will be shown first at the West Sussex Record Office, and then in the cathedral. This short essay was written for the festival website.
My own book on Hussey’s patronage of the arts is published by Palgrave Macmillan.

Walter Hussey, dean of Chichester between 1955 and 1977, was the most significant patron of the contemporary arts for the Church of England in the twentieth century. The Bernstein in Chichester festival celebrates his most famous commission of music for Chichester, the Chichester Psalms. But there was more music than this for the cathedral: works from William Walton, Lennox Berkeley and others. For his church of St Matthew Northampton (where he was vicar for nearly twenty years before coming to Chichester) there was more music: from Lennox Berkeley, Gerald Finzi (Lo, the full final sacrifice), Michael Tippett and (most famously) Rejoice in the Lamb, by Benjamin Britten, with whom he became a lifelong friend. 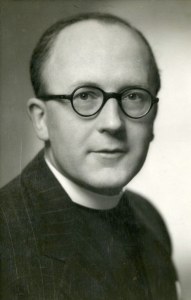 Though music was perhaps Hussey’s first love, his own collection of painting and sculpture was the basis of the collection at Pallant House in Chichester. Visitors to the cathedral can see commissions from John Piper, Graham Sutherland and also Marc Chagall; Chichester is one of only two churches in the UK that contain Chagall stained glass. At Northampton two commissions by Hussey still face each other across the church: one by Sutherland, and the other, Hussey’s first, from Henry Moore.

In 1943, in wartime Northampton, still under blackout conditions at night, why did Hussey, provincial parish priest, decide that a revival of the religious arts should be his life’s work? (This, to be sure, was not his first thought, but within a few short years he had achieved national and international recognition for his project.) Hussey was not given to much theological reflection on why he, a priest, should be trying to commission contemporary art for the church at a time when such activity was at a low ebb. But Hussey was led by his senses. Deeply moved as a young man in London by the art he could see and the music he could hear, he could not see why the close relationship between church and artist he saw in the medieval churches of England should not be restored. Leaving the justification to others to make, he decided just to do what he could in a practical way. Unencumbered by any sense of his place in the pecking order, his first successful commissions were from Britten and Moore, who came to be arguably the two greatest exponents of their arts that England produced in the twentieth century.

Kenneth, Lord Clark, a Hussey ally from early on, described him as ‘aesthete, impressario and indomitable persuader’. It was this persistence and sheer self-confidence which led him to approach Leonard Bernstein on the basis of the briefest of meetings in New York some years before. But it is this chutzpah that is the hallmark of Hussey’s way of working. Artistic commissions in the twenty-first century tend to be committee affairs, with stages of consultation with all those with an interest in a project. Hussey was a patron of an older school: he kept his eyes and ears open, decided what he liked, and went all out to persuade an artist or composer to work for him, and to raise the money to pay for it. Chichester, Northampton, and the English church in general are the richer for it.