A few weeks late, I notice a review of my book on Michael Ramsey in the Journal of Ecclesiastical History, by Jeremy Bonner. I’m very pleased to have another positive review to add to those in the TLS, Church Times and Reviews in History.

‘With recent new biographies of Rowan Williams, Cosmo Lang and Geoffrey Fisher, archiepiscopal biography has become something of a cottage industry, but Peter Webster’s treatment of the 100th Archbishop of Canterbury does not disappoint. 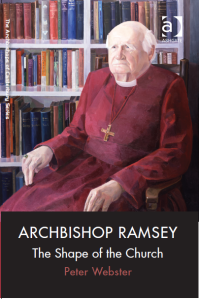 ‘[…] Rather than a strict biography, Archbishop Ramsey offers an assessment of both the man and the office against the backdrop of an era marked by growing disaffection both from the idea of religious establishment and from organized religion more generally. It is in Ramsey’s pronouncements that we see an early Anglican attempt formally to define a post-Christendom model for the atrophied Anglican establishment that he inherited. Such a model, while fully comprehensible to most other churches of the Anglican Communion, came as a shock to those who still thought of the Church of England as a bastion of moral – if not social – order. It earned Ramsey considerable opprobrium from a wide variety of persons both within and outside the Church, even as it proclaimed a fundamentally catholic vision of the Church as the Body of Christ. [… ] Webster opens a window on an eventful primacy.